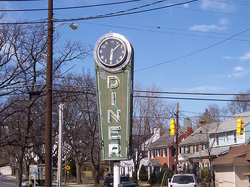 I drove by this diner a few times in 2010.  They are remodelling the actual diner and have removed the sign. I can only hope that they are refurbishing this lovely sign!

- Established in 1948:
The Triangle Diner has been a popular Winchester fixture since 1948. It is called the Triangle Diner because it sits on a triangular shaped piece of land at the intersection of South Braddock Street and West Gerrard Street -- across from Handley High School. - Classic Architecture:
The Diner was built by famous diner designer Jerry O'Mahony in New Jersey and transported to Winchester by truck in the late 1940's. O'Mahony built over 2,000 pre-fabricated diner buildings, yet only a few remain in existence today across the United States. Most have been demolished and are now the sites of high rise office and condo buildings.  The Triangle Diner is preserved at its original site, and serves as a unique original example of the true American diner architectural style - a style now copied by modern restaurant chains like the Silver Diner and others.

- Patsy Cline:
Country Music Hall of Fame vocalist Patsy Cline worked part-time at the Diner as a waitress when she was a teenager. At that time she was known by her original birth name, Virginia Patterson Hensley. She later described those years of her life as the time when she was "slinging hash", in other words serving food, and itching to get her music career going. She was born in Winchester in 1932 and went to Handley High School across the street from the Diner. She also worked at the soda fountain counter at the drug store on the other side of the Diner.