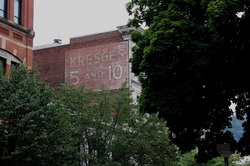 Kresge's And the man behind the brand is...
Sebastian Kresge

Sebastian Spering Kresge's first business enterprise was a single hive of bees he nursed into a colony of 32 hives as a young boy. He would keep bees as an adult hobby because, he said, "My bees always remind me that hard work, thrift, sobriety and earnest struggle to live an upright Christian life are the rungs of the ladder of success."

The profits from his hives helped finance his schooling at the Eastman Business College in Poughkeepsie, New York. What he couldn't pay for he borrowed from his father with a bargain that he would give his father all his earnings, save board and clothing, until he was 21.

At 19 he worked one year as a country school teacher for $22 a month but was anxious to get underway in business and began clerking in a Scranton grocery store in 1889. With his obligation met at age 21 Kresge began exploring the business field working in door-to-door selling, insurance, bookkeeping, and baking before settling into the sale of tinware for five years on straight commission.

One of his customers was F.W. Woolworth who impressed Kresge with the size and efficiency of his cash-only business. Kresge attempted to join Woolworth's
5¢ & 10¢ business in 1896 but was not successful. He entered into other retailing partnerships with $8000 he had carefully saved, working in stores in Pennsylvania, Tennessee and Michigan.

By 1899 he was on his own in Detroit. Kresge put a large number of items on open counters where they could be examined and appraised. The slogan over his door said it all: "Nothing over 10 cents." Immediately Kresge set about to build a chain of 5 & 10s.

He had an uncanny knack for site location and saw each new store as a personal challenge. His stores were in heavily trafficked areas and appealed to bargain hunters. By 1916 he had 150 Kresge 5 &10 stores.

With inflation after World War I the heyday of the 5 & 10 came to an end.
As a result Kresge started "Green Front Stores" in 1920 which featured goods from 25¢ to $1.00 to distinguish them from his Red Front 5 &10s. Both concepts prospered.
Kresge retired as president in 1925 devoting much of his time to the Kresge foundation which he endowed with $1,300,000 in cash and $65,000,000 in securities. Kresge was extremely generous with employees and associates but never learned to spend money on himself. His personal frugality was legendary. His stinginess was cited as a complaint in two messy, highly publicized divorces.

He used a pair of shoes until they were completely worn out - and then lined them with paper. His inexpensive plain suits lasted until the last thread. One of his rare indulgences was an air-cooled Franklin motor car which according to a close associate, "he ran until the wheels fell off." At age 58 some friends persuaded him to take up golf but he gave up the sport after three rounds because, he said, he could not afford to lose a golf ball.

After his retirement as president he remained active in company affairs as Chairman of the Board, a post he retained until the age of 98 when the company had grown to include 670 Kresge variety stores, 150 K-Mart department stores and 110 Jupiter discount stores. He died in 1966, within sight of his birthplace in Mountainhome, Pennsylvania where his Swiss ancestors settled in 1765, at the age of 99. He lived to within one year of his mother, whose picture he displayed in every Kresge store until she died in 1940 at the age of 100.
http://famousbrandnames.blogspot.com/2007/02/kresges.html 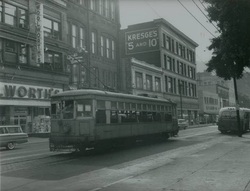 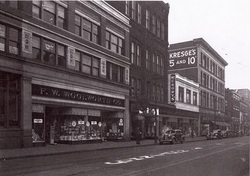