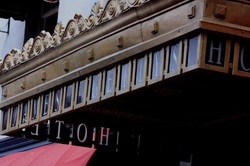 James Gettys, the founder of Gettysburg, sold his first plot of land in 1787 to John Troxell, Sr. In 1804, Mr. Troxell opened the Sign of the Buck tavern and roadhouse to accommodate those traveling to the western frontier of Pennsylvania and beyond. As our nation grew and Gettysburg became the county seat, this establishment grew to house more travelers. By 1863, the town of Gettysburg was booming with 2,400 residents and many businesses. The hotel, then known as the Union Hotel, served as a hospital for the wounded soldiers after the battle. Indeed, the events that transpired during those three long days in July forever changed the course of our nation's history, Gettysburg's history and this hotel's history.

By April of 1888, Gettysburg was a stopping place for all to see. Everyone wanted to walk upon the battlefields of the Civil War. The veterans returned for the 25th Anniversary of the battle and this establishment, then named the City Hotel, readied for the celebration by expanding to accommodate 250 guests.

This hotel has welcomed many guests during its existence, thriving in the 1920's and 30's as transportation improved. By the 1950's, modern "motels" gained popularity as the baby boom families took to their automobiles and drove to their motel room doors. The James Gettys Hotel closed in the 60's and was used as an apartment building until the 80's, when it served as an American Youth Hostel for ten years. In March of 1995, the building became a part of our lives and was turned back into the James Gettys Hotel.

As with most things in life, this historic building has come full circle. As our busy lifestyles quicken and our suburban neighborhoods continue to grow, we find ourselves wanting to slow our pace; again we are appreciating the beautiful simplicity of this country's earlier times.

We would like to welcome you to the James Gettys Hotel, where a tiny piece of our town's history has been preserved. Today, our goal as innkeepers is to carry on this hotel's tradition, which is to provide you with a memorable experience that will be looked back upon as another small part of your history.