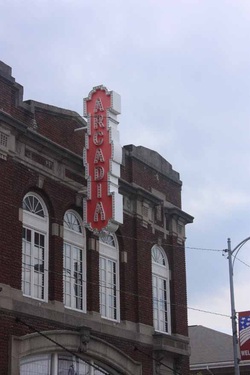 The building was opened in 1921 by the Windber Lumber Company. The theatre showcased vaudeville acts and cinema productions until it was renamed "Cinema 56" in 1963. The theatre closed down in 1975 and was reopened in 1977 by the Penn Wood Players who sought to make Arcadia their headquarters. The group was prevented from doing so by the extensive damage the Johnstown Flood of 1977 caused to the building. A large section of the roof caved in and the theater closed. In 1989 the Eureka Coal Foundation purchased the theater and in 1990 renovations began to restore the Arcadia Theatre to its 1921 granduer.
http://www.scoutpa.com/home/1608285

The Arcadia Theater, which opened on May 5, 1921 was designed by Henry Reinhold and Ralph L. Land, architects from Philadelphia. The Windber Lumber Company, a subsidiary of Berwind-White Coal Mining Company, built the theater with money donated by a group of stockholders known as the Windber Theater Corporation. It became one of the most significant of the various recreation and entertainment opportunities provided by the company for its mining employees.

The Arcadia Theater showcased many vaudeville acts as well as cinema productions before being sold in 1963, and renamed "Cinema 56."  In 1975 the theater was closed. In 1977, however, the Penn Wood Players began to make plans to make the Arcadia their headquarters; but the Johnstown Flood of 1977 severely damaged the building and the theater was closed.

In 1989 the Eureka Coal Heritage Foundation purchased the theater in order to restore the once grand Arcadia Theater to its former splendor. The restoration began in 1990 with the building architects using old pictures and the memories of many people for the interior and exterior designs. The intent of the restoration was to make the theater look as it did in 1921.

On October 31, 1998 the Arcadia re-opened its magnificent doors with the production of the "Best of Broadway."

With the exception of present day computer technology to control both sound and light systems, the Arcadia Theater has successfully recaptured its original beauty and "magic" with both its appearance and live performances monthly.